Kolkata, formerly called Calcutta is the capital of West Bengal, culture capital of India and the commercial capital of Eastern India. It has a population of more than 15 million making it one of the most populous cities in India and in the world.
As my plane touches down and the long drive to the hotel commenced, I did what I always do; OBSERVE. This has always been a habit of mine, I love sitting next to the window so I could see my surroundings and get a general feel of the place where I am at. One word would sum up my first impression of Kolkata, poverty.
I actually have no plans on what I’ll do in my 24 hour stay in Calcutta but I am not one who will just stay in my room and do nothing. I was contemplating revisiting Victoria Memorial or visit Mother Teresa’s house and orphanage. Luckily, I was spared from further indecisiveness when three of my Indian colleagues (Olinda, Tabs and Kushboo ) invited me to go with them and try authentic Bengali cuisine. After all, what a great way to learn about the place and it’s people but thru their food. 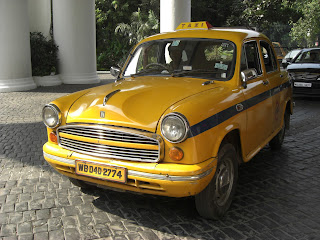 We hopped on an ancient looking yellow cab and my journey to Kolkata begins. Sitting next to the window, I take in the sights and the smell of the city. As we drive along (or at least try to), Kolkata is so congested that the traffic is a nightmare. The roads were narrow and it seems like there are no road rules. Vehicles just move whereever they please or space to move into. Their driving is crazy! Everyone is like a speed demon each time they are able to move and they slam into the brakes each time they have to stop. Five minutes into the drive and I already have a headache! To make matters worst, part of their driving skill is to honk constantly! We had to ask the cab driver a million of times to take it easy on the car horn. 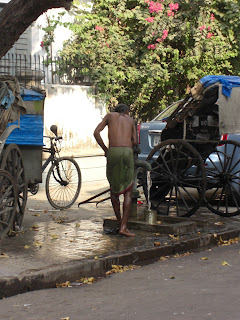 I decided to take advantage of the traffic jam to have a closer look of Kolkata’s streets and what caught my attention are the sidewalks. Normally, a sidewalk is for pedestrians to pass by or walk thru. In here, sidewalks mean everything to them. I mean, it’s their home, barber shop, restaurant and even their toilets! It’s not unusual for me to see sidewalks with people living on it or shops since I have seen it in my own country but what really shocked me is to see adults taking a bath in the sidewalk or doing a number two for the whole world to see. Sad really, I felt the overwhelming poverty in this city.
Kolkata is not entirely poor. In reality, there are two worlds that exists here: affluence and poverty. This is the city where the priviledged and the less fortunate live side by side. I mean in the same street you would see a mansion and next to it a shanty. I have gotten used to the idea that the priviledged and the less fortunate live separately, each with their own territory.But here, the line separating seemed blurred or non existent at all.
We have been on the road for a good half an hour when we our driver finally confessed that he does not exactly know where we are going so we had to settle with getting dropped off at a nearby landmark close to the restaurant. I didn’t mind at all. I honestly couldn’t wait to get off the cab and get some air. I think I endured enough: 30 minutes inside an ancient rusty cab with no airconditioning on a hot dry day in Calcutta. 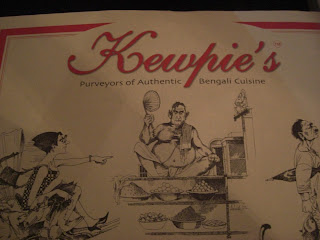 It took us quite a while before we found the restaurant. We walked alley after alley until we saw the sign in a remote side street.The sign read Kewpie’s: Purveyors of Authentic Bengali Cuisine.The restaurant is an actual house doubled up as a food outlet thus giving it a homey feel to it.
Kewpies is one of the most famous restaurants in Kolkata. Locals and tourists alike rave about the great food the restaurant has to offer after all the owners wife, the original chef is an accomplished cook book writer. That should say something about the food at the very least. The restaurant is so famous that a reservation is necessary, which we didn’t but we were fortunate enough to be accommodated.
I scan the menu and soon found out that I am very unfamiliar with their dishes. It’s quite worrisome but then again I am up for a culinary adventure. My only concern is that I cannot handle anything too spicy. I have a weak stomach when it comes to that. I was then reassured that Bengali cuisine isn’t spicy in comparison to the other areas in India. I was at the mercy of my three Indian colleagues since they would have to order for me. 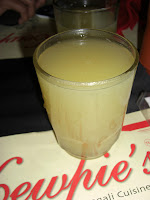 The first thing I was made to try is a drink called aamras. It is made from the pulp of the mango mixed with ghee, milk, sugar and spices such as cardamom powder, chat masala and grounded cumin seed. It doesn’t taste bad at all but I must say it’s not something I would order for myself.
My companions ordered mitchus maacher thala a traditional Bengali thali (platter) for me. The platter includes rice, chappatti, dahl, potatoes, fried eggplant, cauliflower, mocha (steamed banana blossom), fried fish, jumbo prawn in curry and the sweet ending, sondesh. I was sure I wrote down the local names of these dishes but as usual the absent minded me seem to have misplaced it.

The food slowly comes one at a time and each dish is serve in small earthen bowls. The main plate is a typical Bengali style, covered in banana leaf. As for the cuttlery, there is none, we eat with our hands!
The food is amazing and I absolutely enjoyed each dish. It was quite different from all the Indian food I’ve tasted. The spices are not overwhelming and I love the fact that it doesn’t have any heat at alI unless you want it to. There are chilis scattered in the table though. The platter compliment each small dish and you just can’t stop eating until you finish everything.  I just made a one big mistake, I took my eyes off on what I was eating and accidentally popped a chili in my mouth. I burned instantly and it felt like there was a hole it my stomach! Lesson learned, look before you eat. 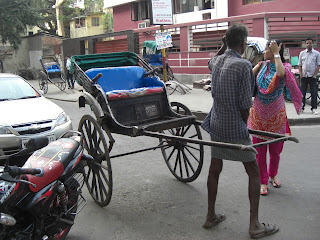 We left Kewpies on a very full stomach and decided to wander about the area to burn some of the calories off. As we were walking about, I saw something fascinating, something that I only saw in old movies and history books. I saw a human pulled rickshaw. As history tells it, the rickshaw came from Asia. A human pulled cart used as mode of transport used by the elite. There are only few places where rickshaws can be found mainly out of concern for the rickshaw workers. Personally, I think rickshaws are inhuman and degrading. It makes me sad to know that there are still people who have no choice but to have this job and most of them are rather frail and old already.
The scene was quite depressing and I couldn’t wait to get out of there. Olinda, Tabs and Kushboo then decided that perhaps a visit to a local saree shop was in order. It might be able to lift my dampen mood when I see colorful cloths and intricate designs on what they consider a national dress. I was eager to agree after all, I might be wearing one sometime this year when my friend Chetna gets married. 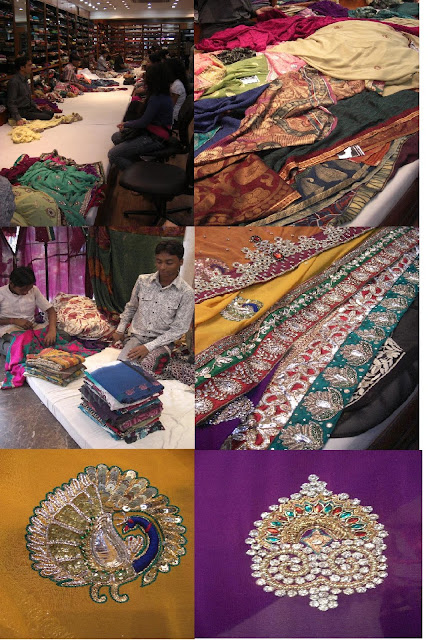 The word sari or saree is derived from Sanskrit which means “a strip of cloth” which is exactly that. Commonly wrapped around the waist and draped around the shoulder, underneath it is a choli which can be a tube top, haltered, short sleeved or whatever the wearer fancies. 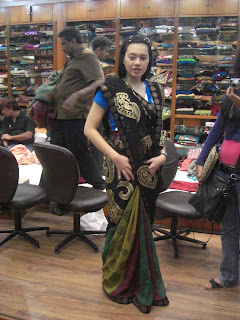 The shop was packed with ladies busy choosing colors, materials and designs. It’s just universal, most girls love shopping and the ladies here are no different. This small shop is filled with every color you can imagine and the men are showing everything they got and sweet talking the ladies to buy. It was quite amusing really. One man noticed that I was the only foreigner in the shop asked me if I would like to try one. He even said, “Just try, no need to buy.” I accepted, after all, I’m only going to try. J Also, I’m very curious as to what I will look like wearing a sari.
Cloth after cloth, material after material and designs after designs were shown to us and it’s no wonder that we were in the shop for almost an hour and half already. One of the best things in Kolkata is their hospitality towards their guests. I mean even in this small saree shop they do not disregard the fact that you are a possible client and they ensure you are comfortable in whatever way you can. They bring you refreshments your choice (softdrinks, water, tea or coffee). 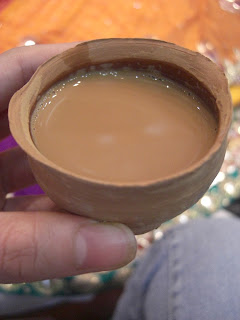 Actually, they brought me this quite unusual tea, they call it masala chai. The color of the tea looks like runny mud and served in a disposable earthen cup. I remember I saw this tea being featured in Discovery Channel and the host didn’t exactly like the tea. I took a whiff and it smells fine to me and decided that anything that doesn’t smell bad shouldn’t taste bad either. My first sip and it tasted like mud. Perhaps, it’s the earthen cup that brought that flavor or the muddy color. I sipped again, it’s not that bad. By the last gulp, I actually enjoyed it. 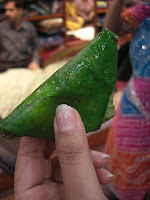 As my three companions finalized their purchase and as we head out the door, the owner of the saree shop offered us one last thing, paan. It is actually a betle leaf chew meant to be a breath freshener but more importantly it is a sign of hospitality towards guests and visitors. I was deeply touched by his gesture and we thanked him as we left. The three girls were debating amongst themselves if I would like the paan and all of them agreed that I wouldn’t. But my curiosity was too strong for my own good, I tried it. I almost hurled. I spat it out as soon as I tasted the overwheming mintiness. The taste was so intense that I felt dizzy instantly. The girls said in a chorus, “We told you so!”
Posted by Cha at Monday, January 03, 2011