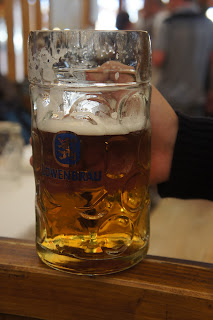 Beer, perhaps the most drank alcoholic beverage in the world. It is also considered one of the oldest man-made drink dating back as early as 5000 BC in Ancient and Egypt and parts of Mesopotamia. This drink made from different starchy products (barley, oats, rice, corn, etc) produced by a fermentation process has been well received and loved to a point of over consumption and a festival which featured beer  as its main attraction. 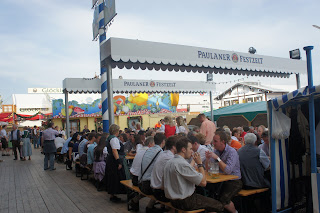 Oktoberfest is equated as a beer festival and that is exactly what it is. It is held in October in most parts of the world except for its birth place. It’s easy to be deceived since it is called Oktoberfest hence the easiest deduction would be a festival in October and it lasts a whole month.WRONG!
The Oktoberfest is a 16-18 daybeer festival starting at the latter half of September and ending in the first weekend of October.  This year the festivities started on September 17 and ended on October 3rd.
Initially the celebration WAS in fact in October, October 12, 1810 to be exact. When Bavarian Crown Prince Ludwig got hitched toPrincess Therese von Sachsen-Hildburghausen, it paved the way for Oktoberfest. The Münchners(people from Munich. True story)were invited for a weeklong celebration to mark the joyous occasion. The celebrations were held in Theresienwiese (Theresa’s meadow) in honor of the princess. Up to this date, the meadows are still the venue of the Oktoberfest. Locals shortened it to Wiesn. 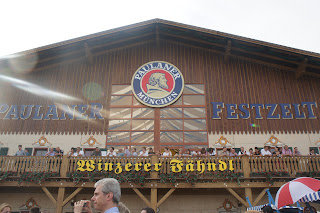 Enough history, basically the celebration was moved to September just because of the weather. It is said that September is warmer thus allowing the celebrants to continue the merrymaking long throughout the night.
2011 is the 201stOktoberfest and I was fortunate enough to be able to have an authentic experience right at its very cradle – München, Bavaria, Germany! Quite frankly speaking, I was more intrigued of the idea of Oktoberfest. Throngs of people littered in the gardens, gigantic tents perched here and there, bar maids in their sexy dirndls carrying ginormous mugs of beers, live music, tables filled with food and of course the drunks! This is what Oktoberfest in my mind looks like. Thanks to the movies and books which illustrated what olden gatherings were like. I am set to find out if my imagination, movie depictions and portrayals of Oktoberfest is as close to the real thing. 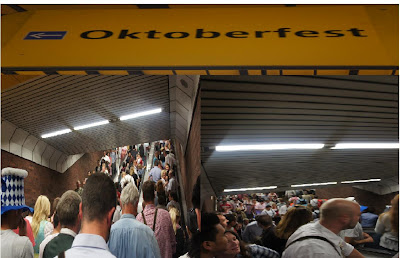 A short subway ride in the Untergrundbahn is the gateway to Weisn. As the train stops and take more people in, I slowly start to realize how massive Oktoberfest as an event truly is. Halfway thru the train was already packed! As the doors opened to let us out in our final destination, I uttered a sigh of bewilderment. There was a flood of people in the station and more people are filling up the place by the minute. But you know what? In spite of the crowd, the people were exceptionally organized and well behaved. People were patiently waiting for their turn in line, to step on to the escalators and onto the beer grounds. You gotta love the Germans for their discipline! As for the foreigners, it would be a shame not to follow their example! 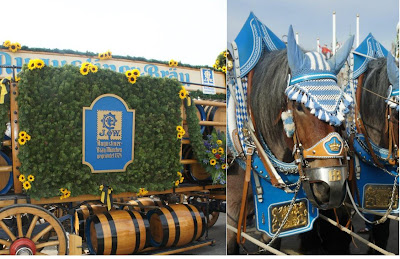 As my group and the crowd spilled onto the grounds, I took in all the sights, the sounds, the smell, the feel, the aura; everything that is Oktoberfest.The feel is so vibrant and alive that it is no hard to feel the excitement that is abuzz. I wanted to capture it all but every time I attempt to take a photo I just couldn’t! The place is just teeming with people that I just gave up. I told myself to plunge in the total experience and capture it if I get lucky.


One of the few notions that I have about Oktoberfest is that the festivities involve largely in beer drinking so when I saw several kid and senior friendly attractions, I find it a very nice surprise. The festival reminds me of a traveling carnivals and amusement parks. There are rides, games, souvenir booths, food concessions, sweets and treats shop. I felt like a kid and a wee bit nostalgic. I look around and see the little kiddies shrieking with delight and getting all excited with just about anything while their parents look on with loving expressions. Ah, to be a kid once more and to be with family, good times! 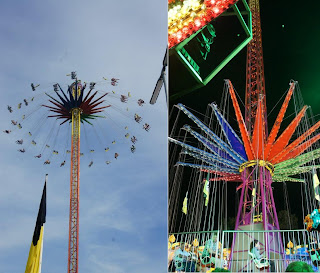 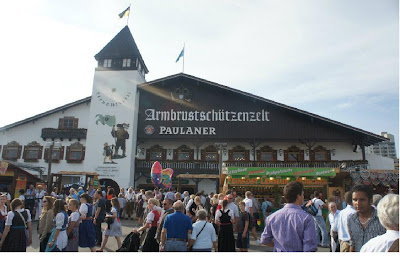 We were on a mission to find a table inside the tents. It was a mission alright! There are 14 large tents which can seat up to 10,000 people and about 18 small tents that can accommodate a few hundred guests. Seats have to reserved way in advance and booked with the particular tent landlord. Of course, there are non-reserved seats but they get taken in a blink of an eye! And once these tables were occupied they will never be vacated! My companions are dying for a beer and are getting desperate to get a table. FYI:Beers will only be served when you got a seat! 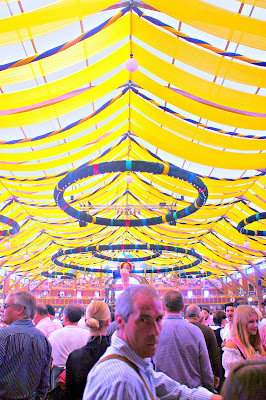 The tents were amazing! I love the bold colors and the decorations. It just screams festivity loud and clear. The energy of the crowd inside is the best part of being inside the tent. The energy and the uproar are undeniably enticing. The band plays catchy tunes and even encourages a prost (toast) every so often (like every 15 minutes). It was a truly a fun atmosphere and we were getting desperate to land a table and join in the fun! 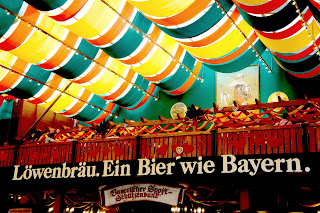 After 4 tents, 2 hours we finally managed to snag a table at HofbräuFestzelt. The venue was an extremely busy one we can only have the table for an hour. DEAL! We immediately ordered food and beers to catch up with the revelers. I am not a beer drinker but I signed up for the Oktoberfest experience and drinking a liter of beer is a requisite. Only beers brewed within the confinement of Munich is served during the festival and it must meet a certain criterion before it is deemed as an Oktoberfest bier. The alcohol and sugar content of the Oktoberfest beer is a little bit higher than the other German beers. One beer is €10 and each year the prices go up. 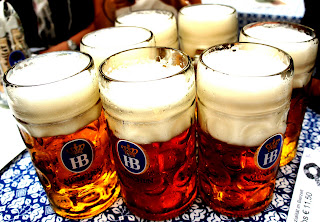 We didn’t have to wait long for our beers when our beer arrived and carried by a barmaid wearing the traditional dirndl. I was in awe by the strength of her wrists and clueless how she was able to carry six gigantic mugs in one go! Each Maß is 1 liter excluding the weight of the glass mug. My friend Eileen told me that there is a tough competition to be a bar maid since one stint at the Oktoberfest and they’re set for a few years or so. Wow! J 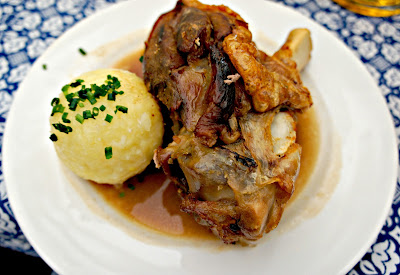 Not long after our food arrived. I didn’t realize I was starving until I saw the food in front of me. I ordered the German version of our crispy pata. They call it shweinshaxe or pork knuckle served with this big yellow ball. I honestly don’t know what it was but it tasted like potato bread. The portion was huge and I couldn’t even finish half of it! I don’t think anyone in our table managed to finish their meal. See, the lesson here is SHARING! As full as our stomachs were the girls could not help noticing the cute brezel (pretzel) guy dressed in lederhosen. To get his attention, we had to buy this gigantic brezel! It was definitely a treat! Treat for the eyes and for the palate ;) 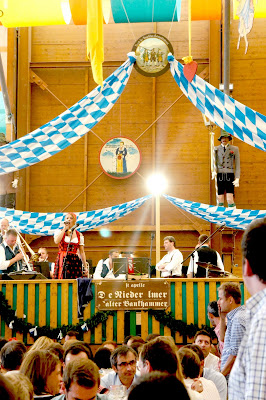 Our hour was up and we were promptly kicked out of our table to give way to the people that actually reserved it. Beers in tow, we head towards any space we can find to just hangout, polish off our drinks, listen to the band and just enjoy our time.
As soon as the last drops of our beer were drunk, we then wondered what to do with the mugs. I already have a premeditated plan for it. I intentionally brought a big bag with me so I could put the mug in there soon after I finished my drink. It is the perfect Oktoberfest memento! In the end, my bag nestled 3 mugs! Two of my companions begged me to take theirs too and I couldn’t refuse them. I should have though; the mugs nearly took my arm off! I nearly backed off my plan. I was afraid of the thought of being caught and the embarrassment that it may cause. But just like all others when alcohol is in your system you get a little braver and stupider, so I took the mug home. Please don’t tell anyone! ;)
Piece of advice, if you decide to take a mug with you, go straight home or to your hotel. Usually, there are check points at the entrance of the tents and any mugs seen will be confiscated. I don’t know if there graver consequence for swiping the mugs. Good thing I never found out!
Posted by Cha at Monday, October 24, 2011 No comments: