Flashback
The year was 1991, month of  June and I was a little girl of seven. I rememembered waking up and knew instantly something big happened. The entire household was in a commotion. My brothers were running out of the house and the “gaya gaya” that I was followed suit. I looked up at the heavens and I see something powdery falling from the sky. I looked around the garden and I saw the grass and santans covered in grey powder. My brothers; Christian, Brian and I were shouting, “it’s snowing!”, jumping up and down trying to catch what we thought was snow. My mom then came out, told us to go back inside and wash our soot stained faces. It was all over the news, Mt. Pinatubo has erupted.
Present
I have been toying with the idea of trekking Mt. Pinatubo for quite a while. It sort of possessed me, became an obsession. I have seen amazing pictures of the volcano and I wanted to see it for myself. It made me wonder if my friends have amazing photography skills or the place itself is as enchanting as its preserved version. A week before my leave starts, I have decided that I will trek Mt. Pinatubo by hook or by crook. ;)
Before that fateful June 1991 eruption, Mt. Pinatubo is just one of the many volcanoes in the Philippines, virtually unknown except perhaps to the inhabitants near by and to those who may remember that it is also the crash site of President Ramon Magsaysay’s, presidential C-47 plane that took his life and 24 others onboard in 1957. Other than that, Mt. Pinatubo was viewed then as a sleeping volcano.
It is the second largest volcanic eruption during the 20th Century bowing only to Mt. Katnovairupta in Alaska in 1912. When Mt. Pinatubo erupted, it spewed its wrath and its seething anger overflowed after years of slumber. It erupted for 9 solid hours! The furious volcano claimed about 800 lives, displaced thousands of families and devastated millions of livelihood and changed the Earth’s climate by cooling the world’s temperature over the next few years.
I’m pretty sure my parents remembers most of the details on what happened that day. That’s why when I told my Mama that I want to go climb Mt. Pinatubo, she flatly said no. But, the stubborn, hard headed and itchyfeet me set my plans into action. 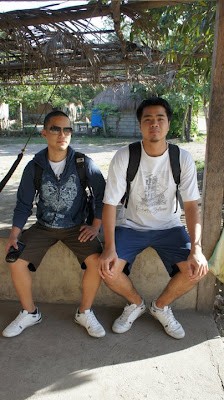 ﻿I was hanging out on a Friday night with two of my best boy friends, Raymond and Nico, we have set the date for our trip – 3 days after! We got too excited so we decided to do it ASAP. As it was my idea, it automatically means that I will be the organizer of our adventure. I had about 2 days to make it happen and settle everything. Talk about pressure and cramming!
We found 2 tour organizers for our trek. However, there had been some complications the whole time. First was about the rate of the tour. It was just disappointing that there are a lot of false advertising out there, so better be careful in booking anything. Secondly, what comes with the package. I was quoted for package with transportation only to find out later on that there’s none and the prices are borderline steep! To cut the long story short, it was Sunday evening when I managed to finalize everything, a mere few hours before the trek happens.
I booked a tour package with Russel of E-Philippines who had been kind enough to accommodate our group inspite of the short notice and who have been patient enough to answer my relentless questions thru minute after minute texts. He quoted us a package of 13k PHP for our group of 6 inclusive of the use of 4x4 jeep, driver, Filipino lunch, local moutain guide, environmental permit and fees. I think the price is a little too high since we have to provide for our own transportation to get to Tarlac. But what the hey, this is what you get for booking everything last minute and not planning properly. (Don’t burst my bubble, this is just my justification so I won’t obsess over it!)
Nico, Raymond, Kuya Chris and I left the South at 4am Monday morning and along the way we picked up Eileen and her boy toy Ro and the journey to Mt. Pinatubo begins. We are meant to be at Mount Pinatubo Spa Town at 8am and the trek should start at 830. We were making good time until we got lost! Yes, thanks to the accurate directions we were given! I refused to think that it’s a bad omen, I would like to think that it’s just another bump along the trip that makes it more worthwhile. We lost about an hour trying to figure out where to go, spotting the landmarks we were given, back tracking and laughing at weird directions such as “follow the yellow line until the very end”. Honestly, who gives directions like that, especially if the said yellow line would sometimes disappear!
When we finally reached the Mt. Pinatubo Spa Town, we were told that we missed our timeslot and we might have to wait a while since the Armed Forces of the Philippines (AFP)are going to conduct their target practice. Great! Good thing we are all a laid back bunch and we didn’t have to wait long anyway. Our group of six was then divided to 2 4x4. Nico, Ray and I on Ole Big Red. Eileen, Ro and Kuya Chris on Bad Boy Blue. We were told it was going to be an hour of exhilarating bumpy ride across Crow Valley before we start the 1 hour trek to Mt. Pinatubo’s Crater.
Our jeep, Big Red, doesn’t look like it’s going to last our trip. It actually looks like a broken down sad jeep. None of the gauges actually work so it’s truly up to the skill of our driver. Fortunately, I knew to never ever judge a booy by its cover. Big Red did great inspite of the many things that it lacks like seatbelt and a proper canopy! 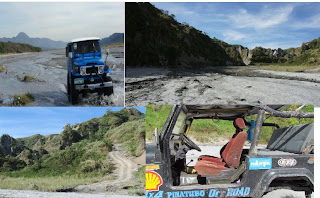 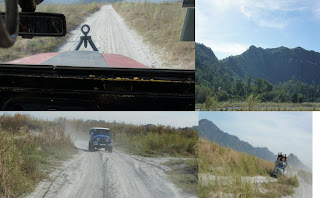 Crow Valley to me is a vast wasteland. The bumpy ride crosses rocky rivers and hectares of ash fields. (Tip: Make sure to cover up your mouth and nose if you have some respiratory problems!) As we trudged along the rough terrain, screaming, laughing and struggling to take pictures the entire time, there is not one second where we did not enjoy it. The ride itself is enjoyable but it is the magnificent view surrounding us that truly made its mark. Here we are in the midst of lahar eroded land in awe of such beauty.
As we approach the jumpoint for our trek to the crater we passed by a small Aeta Village, as we drove by they gave us friendly waves and warm smiles. It’s just a crying shame we did not get the chance to stop and interact with them. I promised myself, next time. 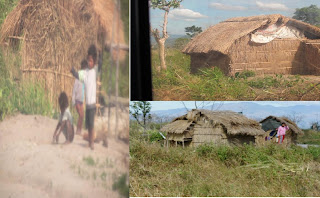 We were then introduced to our local guide, an Aeta, whose name I cannot recall now. Sorry! L He told us that by the looks of our bunch we are beginners therefore our trek to the crater is approximately an hour, the easier route. I was kinda disappointed because I wanted a real challenge. As in sweaty, labored breathing, close to tears, broken shoes, a little cut here and there, falling, tripping kind of challenge! Call me crazy but that’s what I want. Then again, I also know I am not as fit as I was once before so maybe this is the right path for me.. for now! 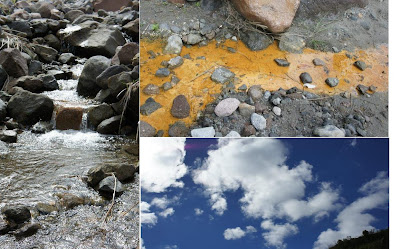 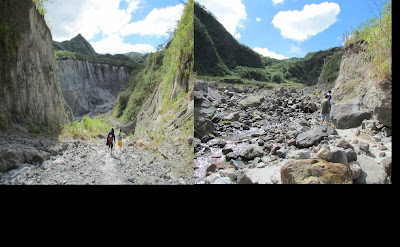 We started by going down a very steep downhill rocky path and I told myself I might get the challenge that I want after all. Nico and Raymond found two walking sticks to guide them through out the trip, pretty smart actually. We walked through very rocky terrain, crossed several streams and brooks, gazed at the awesome rock formation around us, took a million pictures and paused to take a closer look at sulfur puddles that sometimes reminds us of peanut butter or a bad case of diarrhea. Most of the time, we were a chatty bunch but now and then we fall silent. Perhaps, we are getting tired or we are just plain speechless to the picturesque view right in front of us. The weather was perfect for our adventure, just the right amount of sun, clouds and wind. I couldn’t imagine it otherwise. I believe we walked for about an hour before our guide said that we are near our destination.
Just in front of us was a sign that read: Young Age: 15 minutes, Middle Age: 18 minutes, Senior Citizen: 20 minutes. Laugh trip! I was positive we would be there in 15 minutes because after all we were  all young but sadly we were slower that senior citizens! In my defense, and a well good one. We spent too much time taking pictures and appreciating each step that we took, not to mention we had to give way to people on their way down. So there! 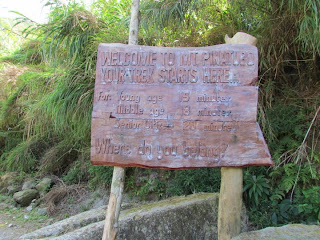 Igan, our guide ( I decided to call him Igan, short for Kaibigan or friend) told us, as we took on a flight of stairs, after that last step we would see the grandeur of Mt. Pinatubo’s crater. Those steps were hell! I can walk for miles without complaints but if you give me stairs to tackle, I will kill you! Hahaha. Those last few gruelling steps were definitely a challenge, I just want to fly and see the view that I may forget the exhaustion that is setting in. When I made it to the top, everything else was forgotten! Here I am, face to face with the view that has possessed me, the object of my obsession, the reason why I endured an hour of bumpy ride and walking for more than an hour! Mt. Pinatubo’s crater finally revealed itself to me. So blue, so tranquil, perfection! J It truly took my breath away!
The clicker happy that I am, took over Eileen’s camera and just started taking snapshots in high hopes of preserving that momentous beauty forever. I would have taken more only if only it were my camera. We had to go down another flight of stairs to get reach the actual lake and get to touch the aqua blue waters of Mt. Pinatubo lake but I was in no rush, I relished each and every step until I got there. Eileen, Ro and my brother weren’t really in the mood to take a dip but Nico, Ray and I were just so eager to. I went in full clothing sans the rubber shoes against Igan’s warning. He said it might be too dangerous but if we really want to, just don’t go too far. 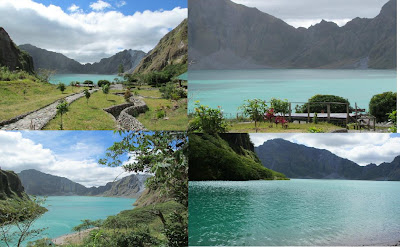 In the water, with two of my bestest friends in the whole world, in one of the most spectacular views our amazing country has to offer, I felt truly happy, at peace and I smiled one of the most genuine smiles I have ever smiled in years. Blessed, that is what I am. J


NOTE: all photos are from my camera and my good friend, Eileen Campos.