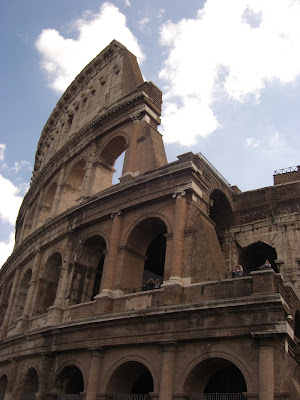 I have saved the most visited spot in Rome for last, the Colosseo; impossible to miss and captivating. A thing of beauty yet at the same time a mask of horror in its heyday. It is a known fact that this amphitheatre is a venue of bloodshed and brutality. It is a place where someone’s life ended for another’s entertainment.
Originally named the Flavian Amphitheatre after the Flavian Dynasty, the era in which it was built. It is considered as one of Rome’s most ancient buildings and perhaps the greatest example of Roman architecture and engineering. It can accommodate about 50,000 spectators and the seats were perfectly inclined to enable the people to get the perfect view wherever they sat. This megalithic amphitheater took 10 years to build and upon its completion, a lavish opening ceremony was held which lasted for 100 days. On the inauguration, the arena was filled with water to reproduce one of the most fantastic events called naumachias - real sea battles. During the 100 day celebration, the Romans were treated to great gladiatorial fights (munera), shows and animal hunts (venationes). Historians estimate that about 5000 animals were slaughtered for the occasion. The games inside the Colosseo continued for four and a half centuries. 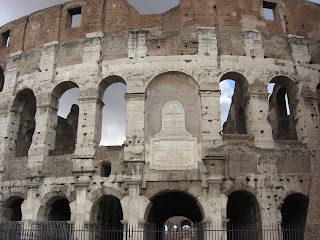 What we see now is actually just a skeleton of what the greatest arena in the world used to be but even in its ruined state, it stands in full grandeur. I can only imagine how awesome it must have been before - all white, made out of marble, completely covered in travertine stone slabs and huge statues decorated the arches. As the Empire declined, the Colosseo was abandoned. In the Middle Ages, with the popes orders, it was ransacked and its marble, lead and iron were harvested to use as materials to build the Barberini Palace, Piazza Venezia and St. Peter’s Basilica.

The first time I saw the Coloseo, it took my breath away and it still does. It's like meeting a superstar and getting starstrucked. Brain stops functioning, speech fails you and you're just standing there deliriously happy. Don't wonder why my Coloseo article is short. I tried my hardest to write more but.. FAIL!
As the sun sets, marking the end of my journey. I leave Rome with nothing but great memories that would last a lifetime and a hopeful heart that I would find myself back in the Eternal City.

P.S
Of all the world's well known and magnificent landmarks, the Colosseo tops my list followed by the Pyramids in Gizah, Egypt.  One down, one to go and then I can die happy. :)
Posted by Cha at Sunday, November 28, 2010