Vatican City is technically not in Rome but it is another city enclave within its walls. It is said to be the smallest city state and is considered the heart of Roman Catholicism. It may be small in area but the treasures within are priceless. 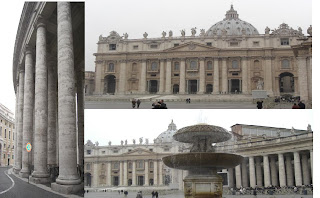 As I enter the walls of the Vatican, I cannot help but feel a little nervous, after all it is considered a holy place. Entering the Vatican and walking through the magnificent columns, St. Peter's Square comes into full view. Designed by Bernini, the famous square draw pilgrims and tourists alike. Directly in front of it the famed St. Peter's Basilica.
St. Peter's Basilica is a sight to behold both inside and out. It is the world's largest church and its dome is the world's largest as well. Inside there are 45 altars and its interiors were decorated by famous artists such as Michaelangelo who did the Pieta; papal altar and throne of St. Peter by Bernini. The church is ornately beautiful. Visitors are welcome to take pictures and video record the inside of the church however there are areas where it is not permitted. It was a Sunday, so I decided to hear mass and pray. Though unable to understand Italian and not being Catholic, something beside me is moved just by the sheer reverence and sacredness of the place.
After mass, I decided to head to the Dome Observatory to have a closer look. The Dome is designed by Michelangelo and it took him 18 years to finish and perfect his design. There is a small fee to go up the observatory and two options to get there. You can either take on 491 steps or take the elevator as far as it goes (which will just save you 171 steps!). Taking the stairs is a much longer yet interesting experience. The journey on the way up seemed like unending flights of stairs, winding and uneven. Some parts would require you to lean, crouch and hold on to a rope to guide you up. The view from the observatory is spectcular! Here you have a magnificent view of Rome, St. Peter's Square with its long symmetrical columns, Vatican Gardens and even the papal apartments. The view is worth every step that I took.
﻿
﻿Unfortunately, the Vatican Museum and the Sistine Chapel were closed at the time of my visit. However, I did get an unexpected surprise. As I was leaving the Vatican, I saw Pope Benedict XVI. It was actually more of a glimpse of him. He was delivering his speech addressed to the Spanish students gathered in the square. Never in my life, hvae I thought that I would get the chance to see one of the most powerful man in the world.
Posted by Cha at Thursday, November 04, 2010